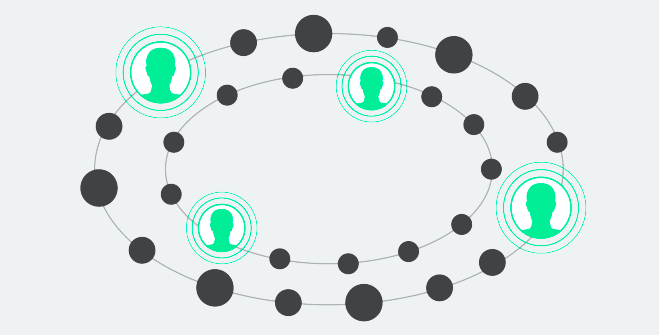 Medical affairs and commercial teams can feel nagging uncertainty about the quality of their engagement list, fearing they are missing out on important people and the critical input they may provide. Data providers are often enlisted to help with this issue, and usually begin by asking teams what kind of people they are interested in engaging, as well as what criteria these individuals must meet.

The problem is that this approach prioritizes eliminating people – teams end up with a list, but don’t know if it includes the people who are impacting opinions and behaviors across a specific disease community. The goal of engagement isn’t to have an exclusionary list of people who sound good, but rather, to understand who can really influence the community life science teams want to engage.

Within3 starts by asking what disease community teams want to engage. All communities comprise a network of relationships between scientific and medical experts and HCPs, all joined through a common interest in treating the condition. In these networks, opinions and behaviors are very strongly influenced by peers. Finding the right people requires analyzing all the relationships across the community to understand its unique structure and informational flow.

Within3 identifies, maps, and analyzes all the relationships in that community to determine who’s essential and how they impact others. With this approach, there is no ambiguity about missing anyone because individuals aren’t prematurely filtered out. Instead, the community tells us who is necessary based on its collective behavior.

A life science client with a product in phase III assumed its launch strategy would focus on HCPs who treat the disease. Within3 discovered that pathologists were extremely influential in the disease area, not only in getting patients into treatment but participating in scientific exchange about the disease state. These key individuals would have been filtered out in a method that restricted results to a narrow set of HCPs. The client revised their strategy and created a separate team and plan to engage pathologists.

A global team supporting a multi-billion-dollar product was preparing for a competitor’s entry. The company already had a dominant market share but wanted to improve physician compliance with best practices to grow product usage. Within3 determined that the client’s engagement list included many less important targets and overlooked the majority of key influencers. Epidemiologists, who had been eliminated from prior lists because they don’t treat patients, had extremely influential relationships and a strong impact on guidelines. The client created an enterprise-wide global strategy to ensure that all of the identified key influencers were being targeted by the organization.

A genetic diagnostics company that produced a new product every six to eight weeks needed a fast and reliable way to identify top influencers in new disease areas. Engaging the right advisors, supporters, and partners early on is vital to successfully move a product through development. In most cases, however, budgeting precludes extensive opinion leader mapping. Within3 used network analytics to quickly identify the top opinion leaders in any disease area within two weeks, within the company’s budget. An integrated social listening platform identified relevant online discussions and messaging to further inform opinion leader engagement and strategy. The client was able to quickly identify the right people to answer key questions and support rapid product development and launch timelines.

More insights, direct to your inbox.